What are you looking for?

Repairing jewelry and watches in this location for decades!

We repair gold and platinum jewelry and designer sterling silver jewelry. As a master craftsman, JR can expertly repair your most precious jewelry or create a fabulous new treasure to your specifications.

We perform a complete battery check-up and give you the freshest swiss made lithium batteries available!

As a WOSTEP certified watchmaker, our master technician can repair almost any timepiece. He understands the mechanics, components, materials, and the aesthetics that go into making a fine watch. Oden uses only certified parts.

****Ordering your part from the original manufacturer could take an extended period of time but you will receive only the best quality parts!

Movements that are marked to be “adjusted” may have a variety or combination of features. One has to read the catalog description for any given movement grade to discover just what level of adjustment is being claimed. High grade watches built after 1905-1908 may be marked with specific adjustments.

This is especially true for watches intended for use in railroad time service. The balance, the wheel that spins back and forth rapidly, is the device that sets the timekeeping rate of the watch. The purpose of all of the features for an adjusted watch is to keep the balance (wheel), as nearly as possible, oscillating at a consistent rate. The consistency of the rate of oscillation of the balance (wheel) determines the timekeeping quality of the watch.

A balance (wheel) that is temperature-compensated has the rim made of two dissimilar metals. There are usually two arms (spokes) from the hub supporting the rim and there is a slot cut in the rim just past each arm. This forms two rim segments having one end supported by the arm and the far end free to move. These slots, and the two colors of metal in the rim, are identifying characteristics.

As the temperature increases, lessening the power of the hairspring – the spring coiled inside of the balance (wheel) – the far ends of the rim segments deflect inward. As temperature decreases, the segment ends relax, moving outward, as the hairspring strength increases. The action is much like an inexpensive thermostat in the home. This movement of the rim segments changes the moment of inertia of the balance (wheel), compensating for the alteration in the hairspring strength. 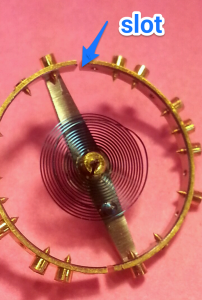 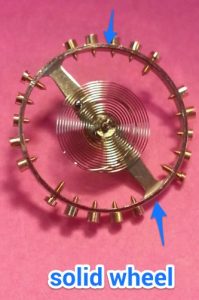 This is sometimes referred to as adjustment to heat and cold. It requires a temperature compensated balance. The balance has pairs of screws (180 degrees apart) set into the rim. These give the balance mass, which sets the basic rate at which it oscillates.

One pair may be the meantime screws (which can be identified – if present – by being longer than the other screws), used to bring the rate deviation to minimum (with its regulatory  center position) after all of the other adjustments have been made.

The locations of most of the pairs of screws (each pair is 180 degrees apart) on the balance (wheel) rim are chosen to provide the best match of change in moment of inertia to change in hairspring strength (there are extra pairs of holes so that the screws may be moved to the best possible positions). The object is to keep the balance (wheel) oscillating at the same rate over the specified temperature range.

Some watches are marked “8 Adjustments.” Depending upon the manufacturers specification at the moment that the watch was made, this can mean adjustment to temperature, isochronism (see below) and 6 positions. Or, it may mean adjustment to heat, cold, isochronism and 5 positions. To clear up the ambiguity, in the early 1950’s, Elgin marked its top (and only) railroad pocket watch “9 Adjustments.”

The marking “Adjusted” on a movement means whatever the manufacturer said it meant at the time that the watch was built. Lacking descriptive factory literature, we have no way of knowing what that means today. Unless a watch is specifically marked as to the number of positions to which it is adjusted, such as a watch that is only marked “Adjusted.” The only way to know that number (if it is adjusted to positions at all) would be to identify the grade and find the manufacturer’s description of the position adjustment for that grade.

This length of run is typically 30 hours for earlier watches and 42 hours for post World War I watches of better quality. However, mainsprings whose power output were nearly constant over the first 20 hours after a full winding were supplied in higher grade watches starting in the late 1920’s. The need for adjustment to isochronism lessened with the application of these mainsprings.